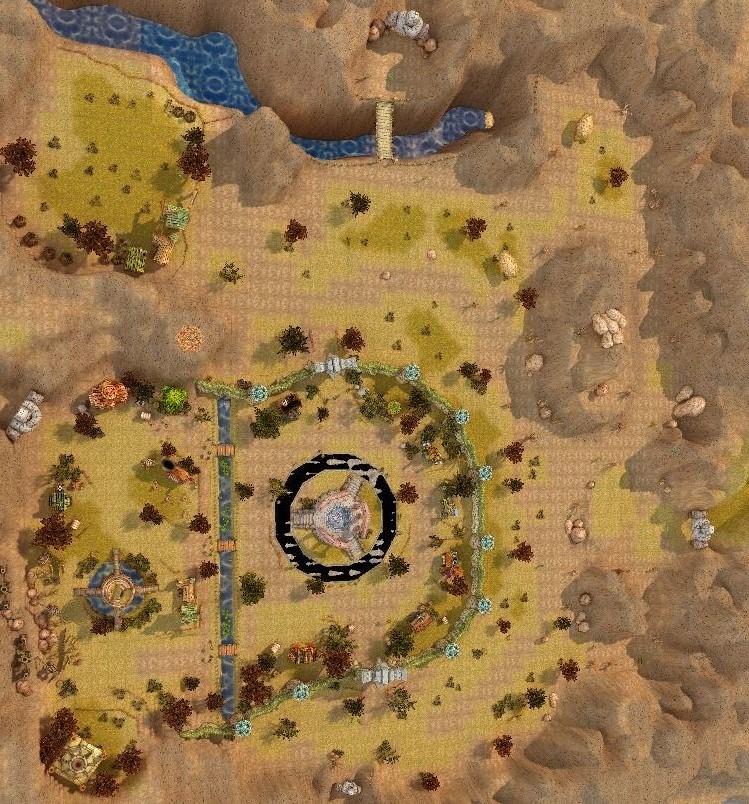 The Pioneers – the first group of humans on these lands – had multiple struggles to overcome. One of said struggles was that of interacting with the natives of the lands. The man known as Zant, one of the Pioneers, pushed the idea of a settlement with the purpose of having a location where humans and natives could meet and engage in negotiations, with hopes of more in the future. During the process of construction they had to deal with the passing of one of their fellow Pioneers, the one known as Luxem.

The construction was underway. When a goddess emerged, Arua. During the construction of the city the goddess presented herself in the canyon with what she called her Legionnaires. Arua approached Zant requesting him to join her, The Great Explorer declined this offer.

The Aruan Reign commenced it’s conquest and ravaged the lands across the planet sparing no mercy to the natives who resided there. Many of these natives were left without a place to go; without a home. Although the Canyon City had remained neutral during the conflict up to that point, in response to the native crisis it decided to open its doors to refugees. The Canyon city began to grow and prosper, population had a spike due to the influx that came from all walks of life throughout Planet Junon.

Viewing their acceptance of refugees into their city as a violation of the neutral standing, the Aruan military set their sights on the canyon city. As a result of this, the Aruan Reign began military operations to conquer the canyon city. The Talisman Battalion was sent first to commence the siege. A strong offensive was brought forth by the battalion, however it was ultimately repelled by the city’s defense, the Zantian Force. After the failure of their siege the Talisman Battalion retreated and the Fairy Battalion took their place. This assault will go down in history as the “The Great Fairy Siege”. Led by Junon the Destroyer, this attack resulted in victory for the Aruans, in the aftermath the city was razed and it’s founder; Zant, was killed in action by General Fairy.

The Cross Defenders, a group formed due to the aftermath of the Great Fairy Siege, began to move about. The first noticeable move of this group was to take back the territory where the canyon city once stood. Claiming the territory as their own and to avenge the death of Zant. In the midst of the rubble that was once known as the Canyon city, the Aruan forces faced off against the Cross Defender forces. After the defeat of the Aruan forces in the area, plans were drafted and executed to rebuild the canyon city.

After reconstruction, the city was renamed to the Canyon City of Zant in its founder’s honor. It would become the focal point of many battles and conflicts. It has been in possession of the Akram Kingdom, the Principality of Junon, and the Republic of Eldeon. The Akram Kingdom being able to reclaim it from the other two Organizations. A notable event worth mentioning was during the Sinocx War. King Sinocx and General Kiel evacuated the city and planted bombs to prevent the city for falling into Arua’s hand. Their plan only temporarily halted the Aruan Rebirth.  After these events, The Aruan Reign has once again risen to power as the prominent ruling Organization, rebuilt the Canyon City and it has become the place for New Defenders and Aruans to gather and rest.

The Canyon City is a waypoint for all sorts of traffic throughout Planet Junon. Due to its location, it is a strategic point economically and diplomatically. Most of the Defender population reside or spend their time in this city thus, a lot of interactions with the natives happen within this area.  The city is home to the Clock Tower, this building holds the time for the entire planet. This is also the location for new defenders to find books and further study into their newly acquired job class as well as, finding armor and weapons that will aid them in their journey.