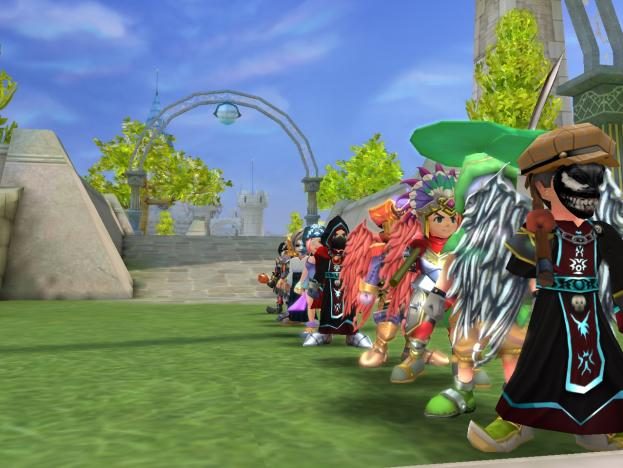 This article is to introduce you to the four fundamental job classes off of which every advanced job class and beyond is based on. An introduction into each can be found below.

This class is about physical prowess and martial might. They wear heavy armor with the highest physical defense and can use a variety of weapons in either offensive or defensive combat styles. Their primary stat is Strength (STR), as it boosts the attack power of their weapons, increases their base health and improves their physical defense.

This class is about mystic power and energy techniques. They wear light armor with the highest energy resistance (defense against energy-based attacks). They wield either a staff or a wand as their primary weapons, with wand users using a variety of off-hand items depending on their combat style. Their primary stat is Intelligence as is increases the potency behind their energy attacks, gives them a larger MP pool and further increases their mystic defense.

Staff-wielding Muses tend to focus on an offensive play style, wielding a variety of ranged attacks and area-of-effect techniques. Wand-wielding Muses go the more supportive route, gaining access to more healing techniques, buffs and the ability to bring fallen allies back on their feet. As for secondary stats, Offensive Muses will typical invest into Concentration for improved accuracy and Strength for extra attack power; while Supportive Muses can increase their Strength for improved defense, Dexterity for improved Dodge Rate or Concentration should they dabble into combat.

This class focuses on agility and subterfuge to achieve their goals, either fighting up close with Katars and Dual Weapons or from afar with Longbows and Crossbows. Their primary stat is Dexterity, which improves dual weapon or longbow damage and increases dodge rate. For those that choose to use the crossbow it is common to see them invest heavily into Strength as well since that weapon benefits from it a fair amount.

Using their high speed and agility, Hawkers fight by inflicting as much damage on their opponents while minimizing the damage they take in return. Ranged Hawkers use their bow techniques and ranged auto-attacks to inflict damage while maintaining the distance between themselves and their foes as wide as possible. Katar hawkers use stealth to approach unsuspecting enemies and assaulting them with a burst of damage before retreating back into the shadows. Dual weapon hawkers forego stealth and instead rely on a high dodge rate to take down their enemies while avoiding their attempts to return the favor.

Hawkers can also call forth animal companions to aid them in combat, as the Hawker increases in level, they can also unlock progressively stronger beasts. Secondary stats for Hawkers include Concentration for improved accuracy, Sense for improved critical hit rate, and strength for improved damage and survivability.

This class is a group of economic experts, crafters and armed combatants. They use a variety of resources to aid them in combat such as ranged weapons such as Guns and Launchers, explosives they’ve crafted, or mercenary fighters they’ve hired. Regardless if their focus is their crafts or combat, their primary stat is Concentration, as it improves the damage dealt by firearms and increases the success rate of crafting attempts.

Dealers focused on combat have access to various shot techniques to pelt enemies from afar, including the extremely long-ranged Sniping technique. When enemies come into midrange, they can lob grenades and explosives at their enemies which they can craft via their Alchemy Crafts. Should a dealer be forced to engage an enemy in close quarters, they can call upon mercenary warriors to act as bodyguards and deal with the threat (keep in mind, mercenaries need Zulie paid for their services!). The secondary stats for combat-oriented dealers are Dexterity, Intelligence and Strength for increased survivability, and Sense for improved critical hit rates on auto attacks. Since Launchers typically have slower attack speeds than Guns, it’s not uncommon to see Launcher users invest heavier in strength while Gun users will invest in Sense.

Dealers focused on crafting have access to adding Prefixes to equipment, examples of these prefixes are Hardened or Balanced weapons and Reinforced or Endowed armors. These different prefixes provide additional stats to the armor such as extra damage, improved accuracy, bonus health or energy. There are a large variety of crafts that an Dealer can research and master, typically too many to fully learn in one go, so crafters tend to plan out the types of crafts they wish to specialize in and go down those paths. Secondary stats for crafting oriented dealers include Intelligence, Charm and Sense as they improve the durability of crafted items and appraisals on crafted equipment, which are bonus stats separate from those provided by prefixes.